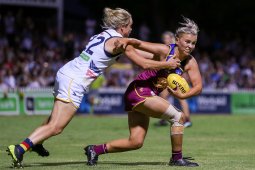 For me, Australian rules football has always been a jarring event. I always associated it with the cold, dark sadness of winter in conjunction with being dragged along by a former boyfriend to boring endless matches. I’d even change channel to avoid the news highlights, such was my aversion about the game. Some might say that was the real motivation for my leaving Melbourne but that’s pure speculation.

Then came Women’s AFL. Suddenly I cared. Suddenly the results became a mark of personal pride when my team were victors. Not only do I stay tuned to the news highlights about the games but I seek out information about who’s winning and even watch some of the matches. Admittedly only the last quarter but that’s a considerable improvement.

What has impressed me so much is that I can now relate to the game and to the players. Their triumph is my triumph. Even better, because of the brave few who fought for years to get the women’s league happening, now the next generation of women can aspire to play football professionally.

This is game-changing for many football-mad families where the daughters were always told they couldn’t play their favourite sport. A radio host recently admitted that only a couple of years ago he stopped his daughter from playing football because he thought there was no future in it for her.

Now, with the local women’s team winning the AFL Grand Final, the level of support is such that it feels like there was always a women’s league. It’s become the new normal.

This struck me as being so similar to STEM careers. Not very long ago women were actively discouraged from participating in STEM subjects because it was considered that there was no future in it for them. Some brave souls forged their way in through the condescension and insults but many women shied away from it.

Now being a woman in STEM is considerably better but there is still room for improvement. We still need to show the next generation that women can have interesting STEM careers, do them well and love them.

This is where science communication and outreach are critical. Love your work? Let school-aged kids see your passion and hear stories about the amazing work you do. Just being there, as a female talking about your experiences, can have such a positive impact on encouraging young girls into non-traditional careers.

It’s something that we STEM-careers women can easily do to make a difference.

Now we just need to work on that pay gap.

Problem-solving the HPLC. Now back to working perfectly!

Set up all the samples ready for a time-dependant analysis and the fire alarm goes off.